This is my first trip in 2014 (if I do not consider Hello Kitty Town in JB), together with my hubby and Alyssa.

Finally, I got out of Singapore and took Tiger Airways to Taipei. Flight was delayed and by the time I got out of the Taoyuan International Airport, it was over 10pm.

It was late and we had decided to take a cab to our hotel at Ximending. Bus ride to Taipei main station costs TWD125 per adult. The cab fare was TWD1090.

We stayed at Diary of Taipei II Hotel. The room was big but there was no window. I didn’t even realise it until the next morning. 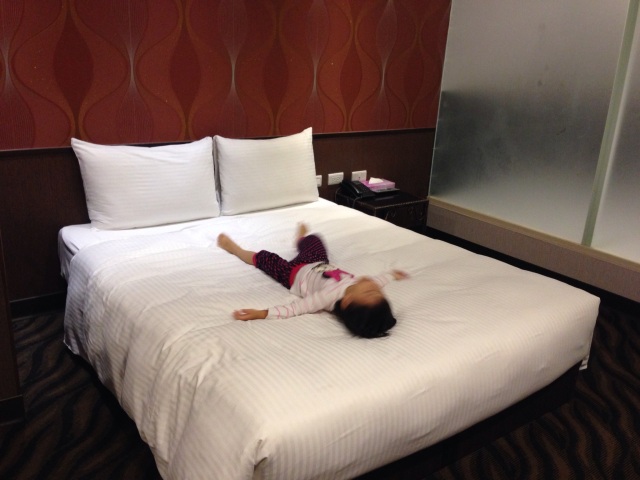 Considered a big toilet but it was part of a room. The toilet was created out of the room and was not designed in the original structure.

We went downstairs to Ximending to buy supper and most shops were closed as it was about 11pm. We had a late night and I couldn’t sleep well as the pillow was too soft to support my neck.

End of day 1 (or rather night) in Taipei.

A mother of 2 who loves travel, food, shopping, face mask and Sale!
View all posts by Rei →
This entry was posted in Travel Tales and tagged taipei, travel. Bookmark the permalink.